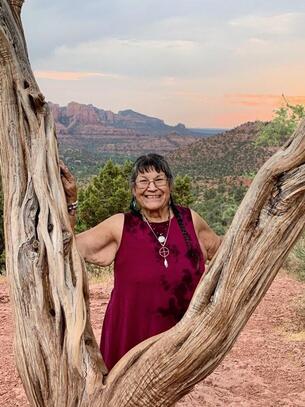 Unci Beverly Littlethunder
At age 16, Beverly was a wife, and became a mother to her firstborn.  Before she reached 30 years of age, she had four additional children and was trying very hard to be a good model to her children.  She was an active member of the American Indian Movement.  When she wasn’t taking nursing classes, organizing civil rights protests, spending time with Indigenous elders, providing spiritual guidance for community members, or preparing ceremonial spaces for community, Beverly could be found at home sewing ceremonial regalia for her children, teaching her children how to bead on a loom, or tending to the squash, tomatoes, and flowers in her garden.  From this vantage point, Beverly was the embodiment of what Buffalo Calf Pipe woman recognizes as a woman who catalyzes the evolution of family growth and healing in order to contribute to the safety of the tribal community, or a “woman who makes the family move”. Beverly blessed her life with the memories of the traditional ways and lived to pass those ways to her children, to be used throughout their lifetimes, and the seven generations to come.  As was the traditional Lakota woman’s way of life.
Yet, just like there are two sides to the Indian head nickel, there were two sides to Beverly, and the eclipse of Beverly’s life was her equally devout political activism in the women’s liberation movement, accompanied by her intimate, tender feelings for women. In the traditional-era, if Beverly had shared, with her elders, details of the dual-role she was living, they may have believed her to be a dreamer of  the “Double Woman’s Appearance,” or a person who embodied both the feminine and male spirit, and she would have been revered within her community as an elder, teacher, and storyteller.  However, in modern-day era, when Beverly disclosed her feelings to her spiritual community, she was referenced as a lesbian whose behavior was considered a sexual perversion and taboo in nature.
Beverly’s story became one of isolation, perseverance, and love.  In her memoir, One Bead at a Time, Beverly’s story vividly illustrates her Native American activism, pain and hardship endured from being rejected by her spiritual community, and same-sex domestic violence.  Beverly shares the intimate details of her life, as well as highlighting the many struggles that she and many other queer Native American people faced in a modern colonized society.
Being a true story teller, Beverly’s stories shed a glimpse of Lakota beliefs and practices, empowerment  for women in ceremonial roles and leadership, and resiliency.  Most importantly, Beverly’s stories shed light on the toxic gender dynamics that are prevalent within Native American communities. Beverly’s story is beautiful, deep, and empowering.​
Support Us